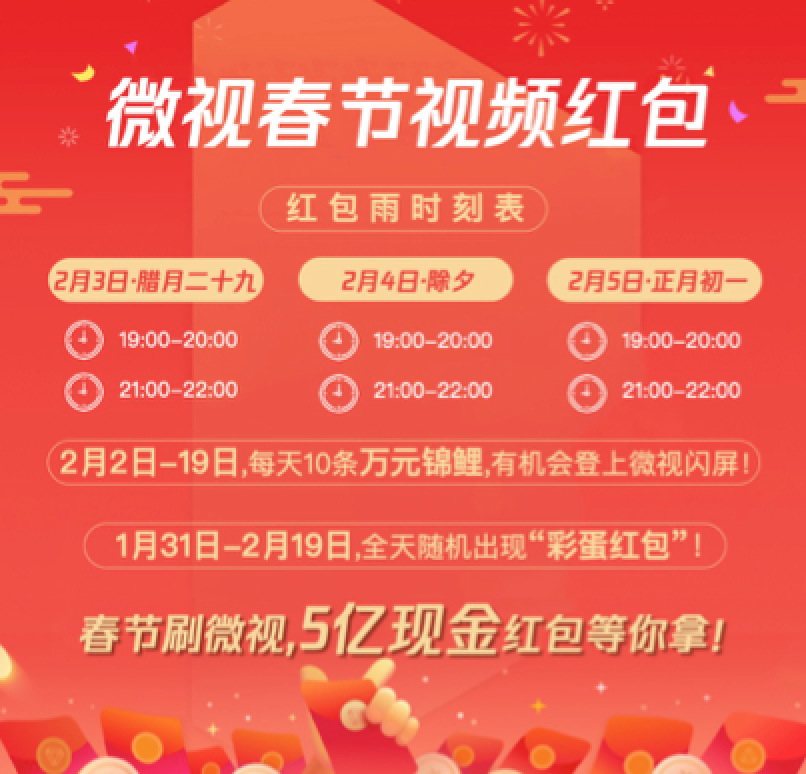 On January 28, Tencent Micro-TV announced that it would launch an innovative way of playing video red envelope during the Spring Festival. It will also launch online micro-video red envelope Spring Festival activities. It will join Xinhua News Agency and other media. More than 100 stars, such as Huang Zitao, Li Yifeng, Chen Linong, Zhang Jie, and more than 60 well-known enterprises, such as Huawei Glory and Lenovo, will be managed by Dunhuang Research Institute and Summer Palace. Agency and other agencies issued 500 million cash bonuses. According to Microvision, the "red envelope rain" of the Spring Festival will come on February 3 (December 29), February 4 (New Year's Eve) and February 5 (the first day of the first lunar month) at 19:00-20:00 and 21:00-22:00 every day. At the same time, from February 2 to February 19, the red envelope of micro-vision video will produce 10 "ten thousand Koi carps" every day, each of them will get 10 thousand red envelopes, and Koi carps will also have the opportunity to board the flash screen of micro-vision. During the Spring Festival, users will randomly appear red-packet video with prompt signs when watching video on Tencent Micro-TV, clicking on the __________.

Read More
Tags: Tencent
Prev From the social elite to incarceration, only a P2P distance
Next As of 2018Q3, revenue was 61.46 million yuan, loss was 23.8 million yuan, and Changyin 58 increased capital by 600 million yuan was approved.
Like